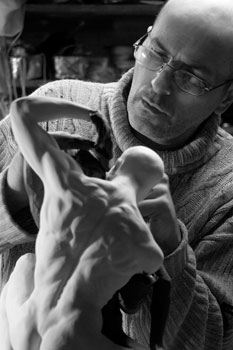 Yves Pires was born the 4th of July in Paris, France. His passion for Visual Arts started early on, from the early days of primary school in the small town of Choisy le Roi just south of Paris, where Yves lived with his parents.
Naturally of a timid nature, design and drawing was a way to seek refuge and a source of unlimited voyages into the inner workings of his psyche.
Despite his gift for drawing, which he exercised with obsession, he was often misunderstood by his teachers.
During his Junior High School years, he still remembers the time when after having spent over 2 hours and worked hard in enlarging a map of Europe, his school teacher the next day accused him of having “traced” the map and stuck him with 4 hours of after school work as punishment.
This experience did little to inspire his desire to integrate the school system and led to his drawing during his school classes.
When he was 16 and in High School, his Art Professor encouraged him to attend a School of Art to further his studies. It was the first time that he painted with “oils” and in turning a canvas on which a painting, done by his father, Yves promptly painted a copy of the beautiful young girl with a turban of Vermeer.
This experience convinced his parents, despite their wishes and best laid plans, to have him develop his artistic tendencies.
Yves enrolled in The Elisa Lemonnier Lycee, where he was preparing his “Bac” in “Visual arts and advertising”. Despite good grades, he left after a few months and a bout of “pre adolescent crisis” behaviour.
After finishing French Military Service , Yves returned to work along side his father in the creative remodelling rehabilitation of residential real estate. He in turn learned all of the different building techniques. In his spare time, Yves developed his sculpting, painting and engraving knowledge and experience.
Soon thereafter he moved to the City of Auxerre and began successfully presenting his paintings and sculptures in expositions all the while working along side his father.
It was around this time and the influence of “Cinema Fantastique” in the area of art, that Yves developed his techniques in modelling, latex foam and airbrush. All of these mediums allowed him to realise sculptures, illustrations and paintings in the Fantastic Art.
While presenting a few of his works during the Auxerre Film Fantastique Festival, Yves met Mr. Luc Besson who was presenting his first film "Le dernier combat", and Yves decided to return to Paris to work in the audiovisual field.
Yves worked as a sculptor for the audio visual production of “Collaricocoshow”. He also worked with Mr. Alain Duverne in the sculpting of a marionette and décor for a publicity spot.
A little later in the year, the stage decorator Mr. Serge Sommier invited Yves to come over to AB Production to work with him and his team.
Two years later Yves had taken charge of the decoration department and would continue to do so for the AB Productions Group during the next ten years. He is credited with the creation of all the set decors of all the audio visual emissions. During this time Yves had the opportunity to develop his sculpture skills into a true “Art form”.
“Currently I consecrate my time creating nude sculptures, eternally in search of that little touch, that through my fingers brings to life the sculptors clay.
When the emotion that I felt penetrates my work and that I succeeded in having you feel that….I has attained my happiness”.